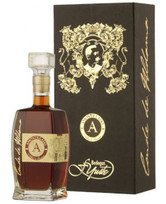 "Francisco Yuste bought an old Amontillado solera in 1927 that had been established in the Barrio Alto district of Sanlúcar de Barrameda in 1740. Today, the Yuste family believes that the average age of the wines in this solera is more than 100 years, making the wine one of the oldest marketed in all of Jerez. This Amontillado, blended from those casks, is a trip. First it evokes the seashore, with its flavors of salt, shells and iodine; then it reveals the lime and mushroom scents the wine developed as it matured under the veil of flor. With air, there are notes of walnuts, smoked almonds and spices. While the aromas are as delicate and nuanced as a perfume, in flavor, with its direction and strength, it is a bullet." - Wine & Spirits Magazine

"Rather bold, with a pronounced walnut-husk thread that cuts through the core of dried orange peel, almond and toasted sesame notes. The long finish is a rapier, with nearly searing acidity and a last whiff of green tea lending a flourish of enticing rusticity. Not for the uninitiated. Drink now. " - James Molesworth, Wine Spectator