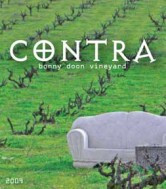 A stunning wine, the 2009 Contra (I believe 2009 is the debut vintage of this cuvee) is a 6,100 case Central Coast Cotes du Rhone-like blend of 55.1% Carignan, 15.4% Grenache and the rest Mourvedre, Petite Sirah and Zinfandel. Its dark ruby hue is accompanied by notes of tree bark, freshly sauteed porcini mushrooms, jus de viande, red currants, kirsch and spice box. With loads of fruit, medium body, wonderful ripeness and purity, and abundant character, this delicious wine can be enjoyed over the next 1-2 years. Obviously, it is a phenomenal value.

It is good to see Randall Grahm return to his roots. People often forget that despite his clever newsletters and obvious gift at turning a phrase and getting most wine journalists to be seduced by his slick prose, for many years he was, in fact, making industrial quantities (nearly 450,000 cases) of mediocre wines. Thankfully, this appears to be changing. Hopefully Grahm, who is a fascinating character, has decided to do what he did best in the mid-eighties ... make exciting wines from generally unusual and under-rated varietals. - RP