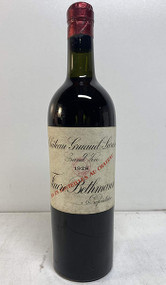 The 1928 Gruaud-Larose is an astonishing wine. I can still remember the first time I encountered it at a vertical in 2007. This second encounter testifies an era when this was one of the best Left Bank wines. It has an ineffably complex bouquet with light red fruit, cocoa, mahogany buteau and a touch of caramel that indicates what must have been a ripe wine in its youth. The palate is beautifully balanced, the power after 90-years only slightly diminished and armed with a killer line of acidity, hints of peppermint and star anise popping up on the finish like before. It is one of the great 1928s and one of the greatest ever wines produced at Gruaud-Larose. Tasted at a private dinner in London - Neal Martin, Vinous Media

Tasted 2 Times With Consistent Notes The 1928 Gruaud-Larose is an amazingly intact wine as it approaches 70 years of age. It exhibits a huge, earthy, sweet, truffle, cedar, and spicy-scented nose, huge body, noticeably high tannin, and stunning concentration. A slight austerity creeps in at the finish. The dark garnet color with only light amber is remarkable given the wine's age. - Robert Parker, Wine Advocate

Obviously in very much better nick than the Léoville-Poyferré 1929. Marked acidity but fully evolved fruit too. Correct and true – classic claret that has lasted brilliantly. In great shape. Miraculous in some ways. - Jancis Robinson