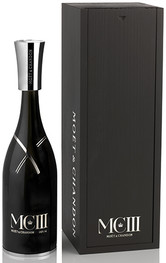 As MC-owned Dom Pérignon sails under its own flag, the NV MCIII is the new prestige cuvée of Moët & Chandon, and it is nothing but a unique assemblage of different vintages or what MC calls "the Champagne of the third millennium." With its ambitious MCIII, Moët seeks the perfect "balance between harmony and generous complexity" by blending young vintages aged in stainless steel vats (I), with matured vintages aged in oak casks (II), and rare vintages aged in glass bottles (III). Call it madness or the "icon of luxury for a new generation," but this is of what the inaugural assemblage NV MCIII 001.14 is made: steel-fermented vins clairs of Chardonnay and Pinot Noir from the vintage 2003, which were blended together in 2004 and comprise 40% of the cuvée (I); another 40% blends the declared vintages 2002, 2000 and 1998 that were mainly fermented in large oak vats and kept as vins clairs for Moët's Grand Vintage (II); and the final 20% assembles the Grand Vintage Collection Champagnes 1999, 1998 and 1993, which had already undergone the second fermentation, but had not been disgorged yet (III). The "ultimate expression of blending" was created in 2004 and kept for ten years on the lees of the second (respectively third) fermentation. The cuvée 001.14 was disgorged in 2014 as Brut with a dosage of four or five grams per liter. The expensive wine offers a fascinatingly deep and concentrated bouquet that is very clear and fresh in its fruit aromas, but also delivers complex secondary aromas of coffee, nougat, biscuits and many more flavors. Full-bodied, ripe and intense on the palate, this is a rich and powerful, yet round and highly elegant cuvée of great complexity and persistence. It is stunningly fresh and pairs fruity aromas with nutty and spicy flavors, revealing a delicate tannin structure and a very long, salty and mineral finish. The MCIII can age for many years and I would recommend not drinking it much earlier than 2020. Moët & Chandon has created a spectacular new luxury cuvée: MCIII. The "icon of luxury for a new generation" is a non-vintaged, multi-vintage blend, and the inaugural cuvée 001.14 – made of six vintages – is indeed an impressive wine. I also tasted the 2008 Grand Vintage Rosé, whereas the Grand Vintage White is scheduled only for the second half of the year. - Stephan Reinhardt, The Wine Advocate

This edition is labelled 001.14, meaning it's from the first batch and disgorged in 2014. In essence, it's a non-vintage blend of vintages aged in three different modes. The first component comes from a ripe and structured vintage – in this case 2003 – that's aged in stainless steel for fruitiness and represents the basis of the blend. This then supports wines aged in oak casks (2002 for the richness, 2000 for the freshness and 1998 for the elegance). Each of these vintages goes into oak for approx. 6 months and is then held in stainless steel as a reserve wine. There's then a third part of the blend, comprising vintage Champagnes from bottle in the cellar (1999, 1998 and 1993) that was simply disgorged for this blend. The result is very complex, especially as the inclusion of some oak is something that really doesn't make an appearance anywhere else in the Moët range. There are some very impressive dried flowers and youthful notes on the initial opening that build to lemons and dried peaches. Some preserved lemon close things out along with the merest hint of toasty grilled hazelnuts on the finish. More like a table wine than a Champagne – reminiscent of Corton-Charlemagne. - James Suckling

The MCIII is easily the most ambitious Champagne I have ever tasted from Moët & Chandon. MCIII is a multi-vintage Champagne based on a single vintage but with a high percentage of reserve wines. One of the truly unique aspects of making Champagne is the length of time that spans the birth of an idea to the moment when a wine finally hits the market. Chef de Caves Benoît Gouez started working on MCIII in 2000, but it took a few years to get things in place, so the first commercial release is based on the 2003 vintage and will be released in the next few months. Gouez adds that the base vintage needs to be a year with an important personality that won't be overpowered by the large amount of reserve wines that go into the blend. MCIII brings together three distinct components; 1) the wine of a single vintage aged in steel - in this case 2003 - 2) older, vintage wines that were vinified and aged in cask - here 2002, 2000 and 1998 Grand Vintage wine that was held back for this release of MCIII - and 3) 1999, 1998 and 1993 bottled Grand Vintage Champagnes that were opened and added to the blend. The proportion of the three components is approximately 40%, 40% and 20%. A rich, vinous Champagne, MCIII reveals striking textural depth and creaminess in a powerful, explosive style that is quite unusual for Moët. Apricot pit, brioche, smoke, spices and honey all add shades of nuance as this ample, textured Champagne shows off its considerable resonance. The inherent richness of the 2003 vintage comes through loud and clear, while the presence of older wines in the blend only adds to the wine’s personality. The inaugural release of MCIII has more than enough depth and density to drink well for another decade, perhaps longer. This first release of MCIII is intriguing to say the least. Suggested retail price is $450, which means MCIII is more expensive - make that quite a bit more expensive - than any other tête de cuvée with the exception of niche Champagnes such as the limited Dom Pérignon P2 and P3 releases, Krug's Clos du Mesnil and Clos d'Ambonnay, Bollinger's Vieilles Vignes Françaises and possibly Salon. My opinion is that the creation of long-term value is best achieved when wines deliver consistently high quality over a long period of time and prices rise commensurately. Setting a high price for a new wine with no track record is a risky proposition that leaves no room for error. However, I also believe that the market is always right, so if Moët & Chandon can sell through the entire 15,000 bottle production (a drop in the bucket by Champagne standards), then they set the right price - Antonio Galloni, Vinous Media

This is the first release of Moët's latest all-singing, all-dancing construction. The III in the name refers to three strata and three 'universes' because it is a blend of wines made in steel, in oak and in glass. Using the language so typical of Moët's theatrical approach to marketing, there are three strata: 37-40% is the first stratum, which is 50/50 Chardonnay/Pinot Noir from the 2003 vintage fermented and aged in steel. Then there's 37-40% of the second stratum, ie Grand Vintage blends from the 1998, 2000 and 2002 vintages that have been partially aged in large oak casks, and then preserved in stainless steel vats. Finally there's 20-25% of the third stratum, which are ‘remise en cercle’ champagnes from the Grand Vintage Collection (from 1993, 1998 and 1999) which have been aged in bottle, disgorged and matured in the house’s cellars in Épernay. The idea is to create layers of complexity. All in all, 10 years on lees, 7 components, 7 vintages and 7 g/l dosage. The UK allocation is 100 bottles! Subtle, creamy and lightly spiced. Lightly honeyed and smoky. Some green apple, but not as tart as that suggests. There is a definite sour aspect to the freshness. It does have real complexity. ‘Not a one-way champagne’. Much more of a wine than a champagne. Creamy, fresh, a little like white burgundy. Does have real depth and persistence. And a freshness that is not just acidity. Though there is freshness in acidity. The wine seemed to have very little mousse and I don’t know if that was the glass or the wine. - JH, Jancis Robinson