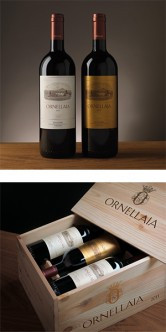 Another dark, intense wine, the 2011 Ornellaia boasts superb depth, richness and power. Here, too, the 2011 has tightened up quite a bit over the last six months. Today, the searing tannins are quite prominent, giving the 2011 an element of gravitas and muscle that argues for cellaring. How long? I am not sure, but the 2011 is built for the long haul. Savory herbs, new leather, menthol and cloves resonate on the huge finish. - Antonio Galloni, Vinous Media September 2014

The 2011 Ornellaia is another gorgeous wine. Mocha, plums, tobacco and licorice blossom from the glass in a rich, seamless wine endowed with stunning depth. Savory notes develop later, adding depth and resonance. The 2011 looks to have a broad drinking window that is sure to provide many stages of pleasure over the next 20+ years. The blend is approximately 55% Cabernet Sauvignon, 29% Merlot, 10% Cabernet Franc and 7% Petit Verdot. Ò Antonio Galloni, Vinous Media August 2013

A dark and inky red, featuring violet, black currant, cedar, sandalwood and iron aromas and flavors. Nonetheless, this comes across as elegant, even as the tannins prove formidable on the finish. A terrific young wine in the making. Cabernet Sauvignon, Merlot, Cabernet Franc and Petit Verdot. Best from 2017 through 2035. Bruce Sanderson, WIne Spectator

This shows incredible concentration with dark-berry, dark-chocolate, mint and rosemary character. Full body with a superb depth of fruit and polished tannins. It's chewy but caressing. This needs at least four or five years to come around. Powerful and intense. Yet it remains fresh and bright. Ò James Suckling

One bottle in each wooden case of 6 has a limited-edition gold LInfinito label highlighting the Infinite character of 2011 Ornellaia.