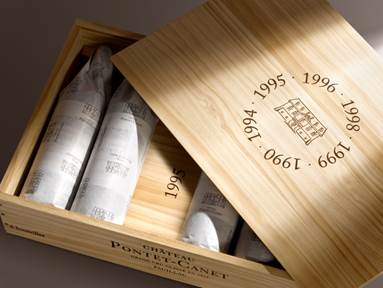 Still deep glossy crimson. Looks much younger than 1994. The first subtle wine of the tasting! Mineral notes and quite dry on the end. Juicy, round and sweet. Still quite savoury – much more so that most 1990s. No overtly fleshy putrid notes. - Jancis Robinson

One of the finest as well as longest-lived wines of the vintage, this opaque purple-colored 1994 needs 7-10 years of cellaring. This rich, impressive, full-bodied wine represents the finest Pontet-Canet produced since the 1961. This full-bodied, purely made wine is crammed with black currant fruit, as well as forbiddingly tannic and backward. Anticipated maturity: 2005-2025. - Robert Parker

Pale rim. Scented and fragrant. Solid but racy underneath. Lively – like the 2004, much better than average for the vintage.  - Jancis Robinson

Fabulous nose of crushed currants, blackberries and forest flowers. Full-bodied, with plenty of ripe fruit and silky tannins. This is really holding back.--'95/'96 Bordeaux retrospective. Best after 2010. 23,000 cases made. - JS, Wine Spectator

An old style Pauillac, yet made with far more purity and richness than the estate's ancient vintages, this broad-shouldered, muscular, classic wine exhibits a saturated purple color, and sensationally dense, rich, concentrated, cassis flavors that roll over the palate with impressive purity and depth. The wine is tannic and closed, but powerful and rich. It appears to possess length and intensity similar to the 1996. This is a great young Pauillac. Anticipated maturity: 2005-2025. - Robert Parker

Boissenot consulted then. 37% Merlot, 7% Cabernet Franc and the rest Cabernet Sauvignon. Mid to light crimson. Light gravelly nose. Sweet start, then quite dusty tannins but an interesting wine with a real fruity core and structure. Round and satisfying.  - Jancis Robinson

The second bottle, from an estate I know like the back of my hand, was the 1996 Pontet Canet. One or two people had suggested that this might be past its best; after all, it predates the innovations and application of biodynamics overseen by Alfred Tesseron by several years. On the contrary, it has aged beautifully. Cedar, scorched earth and mint blossomed on a nose that is firmly into its secondary phase, yet laden with more fruit than expected considering both its age and the austere style of Left Bank 1996s. The palate might be nearing the end of its drinking plateau, so don’t hold back if you own a few bottles. But I admired its balance and density, its structure and classicism, and the typical Pauillac traits of cedar and a touch of mint toward the finish. I savored it down to the last drop. - Neal Martin, Vinous Media

I was shocked by how backward the 1996 Pontet-Canet was on the three occasions I tasted it in January. This wine possesses superb potential, but it appears a decade's worth of patience will be necessary. The color is a saturated dark purple. With coaxing, the wine offers aromas of black currant jam intertwined with minerals, sweet oak, and spice. A full-bodied wine, it possesses layered, concentrated, sweet fruit, with an elevated level of ripe tannin. Anticipated maturity: 2010-2035. - Robert Parker

The 1998 Pontet Canet was made at a time when the property practiced green harvesting that began in 1994 but is not done today. “The changes were in the mind at this stage,” commented Jean-Michel Comme wryly. Initially it felt a little muddled on the nose but it gains focus with time. Eventually it offers straightforward blackberry, briary and cedar scents. The palate is medium-bodied with fine tannin, crisp acidity, plenty of cedar and mint-laced black fruit with a pleasant, quite lively and lightly spiced finish that lingers in the mouth. This is a commendable 1998 from the château before they really began to embrace biodynamics. Tasted at the château. - Neal Martin, Vinous Media

The 1999 Pontet-Canet has long been a favorite vintage of mine. At the time, the vineyard was in better shape than it had been, according to Jean-Michel Comme, though organic/biodynamic viticulture had not yet been introduced. The bouquet is very well defined and focused, offering blackberry, cedar and a hint of pine forest gently unfolding. The palate is medium-bodied with supple tannin, a fine bead of acidity, plenty of black fruit and fine grip. There is a greater sense of rondeur compared to young bottles that I encountered, and touches of white pepper and clove appear toward the satisfyingly persistent finish. One of the best Pauillacs of this vintage. Tasted from an ex-château bottle at the estate. - Neal Martin, Vinous Media