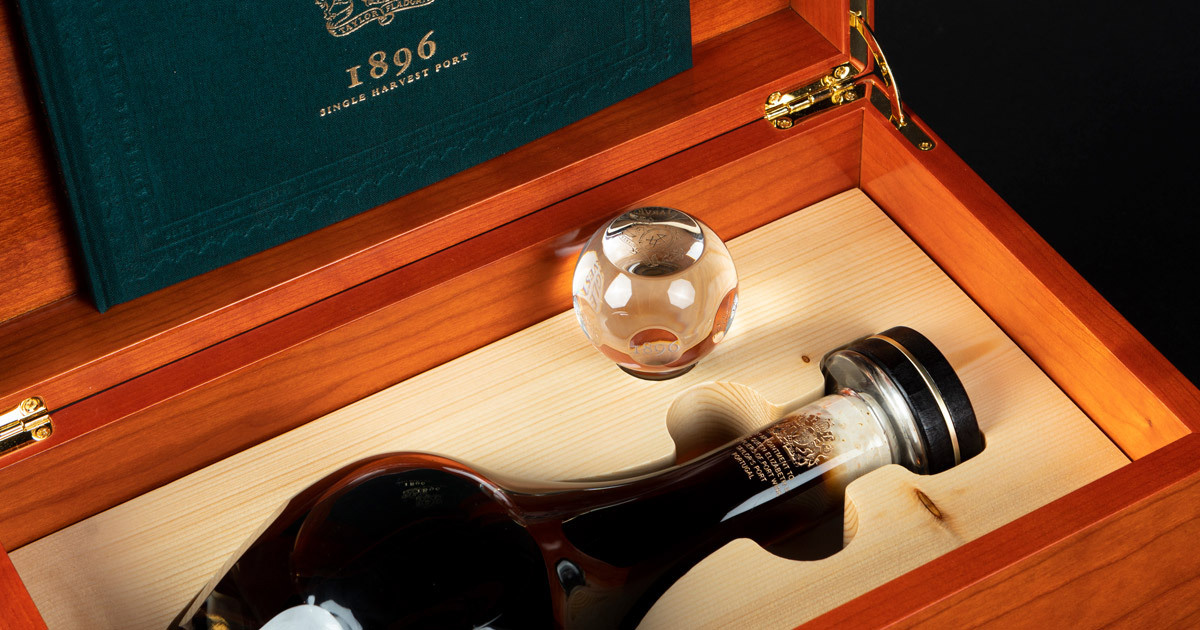 Good things come to those who wait. The last two pipes (casks) of a wine set aside 125 years ago were bottled earlier this year. The 1896 vintage was a watershed for the Port trade as it was much the best harvest since phylloxera had ravaged the Douro valley in the 1870s. The wine came to Taylors through Wiese & Krohn, latterly a small Portuguese-owned company that was bought by the Fladgate Partnership in 2013. Deep mahogany centre with a thin olive- green rim; distinctly and very beautifully lifted on the nose, a touch balsamic or in Portuguese terms, vinagrinho, with a touch of cask dissipating to reveal a wonderful perfume of quince and a hint of roast coffee; richly concentrated with wonderfully mellifluous texture and a fresh streak of acidity which stops it from cloying, there’s a hint of molasses, butterscotch and leather on the finish which, as you might expect, goes on and on and on. The essence of Port: glorious and the last of its kind. - Richard Mayson, Decanter

The character of this rare wine was shaped by time.

Taylor Fladgate possesses valuable reserves of very old Port lying in cask in its historic cellars in Oporto. These include a few unique gems, each representing a tiny volume of wine. On very rare occasions, at the discretion of the family, such wines have been launched as Limited Editions. It is now the turn of this priceless wine, in its 125th year of ageing in hand crafted oak casks, to be made available on strict allocation to selected customers around the world. Produced in the magnificent harvest of 1896, one of the finest of the 19th century, it was born at the start of an era of renewal in the Douro valley vineyards after the terrible scourge of Phylloxera.

The launch of a wine as old, valuable and unique as this occurs only a handful of times in a generation. It is by its nature a historic event in its own right and restricted to a very small circle of rare wine collectors and connoisseurs.

As often occurs in years when the finest Port are made, the harvest of 1896 was preceded by a hot ripening season in the Douro Valley. Temperatures throughout Europe in the month of August were among the hottest ever recorded before or since, with the heatwave causing fatalities as far north as Königsberg in Prussia. There were also heatwaves of historic intensity in the eastern United States and in Australia. As a result of the hot summer conditions, the harvest in the Douro Valley began much earlier than usual at the beginning of September. Contemporary accounts describe the crop as being in excellent condition and reported that the wines continued to gain in depth and intensity over the ensuing months.