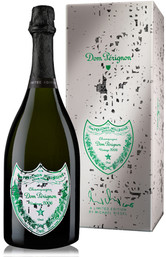 "The 2006 Dom Pérignon is a beautifully balanced, harmonious Dom Pérignon that strikes an incredibly appealing stylistic middle ground. Rich, voluptuous and creamy, the 2006 shows off fabulous intensity in a style that brings together the ripeness of 2002 with the greater sense of verve and overall freshness that is such a signature of the 2004. Bass notes and a feeling of phenolic grip on the finish recall the 2003, as the Pinot Noir is particularly expressive today. After an irregular summer that saw elevated temperatures in July followed by cooler, damp conditions in August, more favorable weather returned in September, pushing maturation ahead and leading to a long, protracted harvest. The 2006 falls into the family of riper, more voluptuous Dom Pérignons, but without veering into the level of opulence seen in vintages such as 2002." — Antonio Galloni, Vinous Media

This is very lively and vibrant with a dense and rich center palate. Lots of complexity and balance with pastry, sliced lemon and light dried mango. Full yet racy and intense. A beautiful center palate. Linear. Shows potential for aging but so good right now. - James Suckling

"The 2006 Dom Pérignon comes from a very rich vintage with an early ripeness that brought a lot of aromatic maturity. The white-golden prestige cuvée contains a bit more Chardonnay than Pinot Noir and opens with a deep and seductive, pretty accessible nose with intense yet fresh fruit aromas of pineapples, with peaches and tangerines. Lively and elegant on the palate, this is a full-bodied, unusually aromatic and fruity DP with a long and tension-filled expression.

During a visit at Dom Pérignon in Hautvillers in March this year, I tasted the three recent vintages of the prestige cuvée plus the often-underrated 1998. Along with the Dom Pérignon Rosé 2004, it was the most fascinating cuvée of the tasting that was as spiritual as it was adequate with regards to the history of the human Dom Pérignon." –Stephan Reinhardt, Wine Advocate