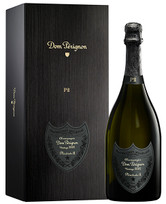 "And so from P1 methuselah to P2, which for Geoffroy ‘goes beyond Champagne’. P2, he continues, must be ‘deeper, richer, longer…better than P1' - otherwise why release it? Well, they haven't yet, although it's pencilled in for later in 2019. Here we have drive, vinosity and incredible length. The sweet and savoury balance indulges with a seductive embrace. Gustav Klimt in a glass maybe. Outstanding.” - Simon Field, Decanter

Deep straw. Very much in its mature phase with intense Dom P character, as though a tincture of Dom P! Creamy and round without a single edge to it, Almost spherical in impression and shape. Where lemon meets bergamot on the nose, and both delicate in texture and rich in flavour on the palate. Pure pleasure. Exceptionally long. A bit of a triumph really. A great legacy. - Jancis Robinson

The 2002 Dom Pérignon P2 is simply stunning. Interestingly, it is also less flamboyant than the original release, although it has all the weight, richness and breadth that wine has always shown. The 2002 will not be released for another two years. Even so, it is super-expressive and alluring even at this very early stage. - Antonio Galloni, Vinous

The 2002 Dom Pérignon P2 is still a youthful wine, but it is beginning to develop appreciable complexity, wafting from the glass with notes of of iodine, warm bread, ripe orchard fruit, peach, citrus oil, smoke and peat, which in Geoffroy's words "are on the verge of aromatic over-ripeness." On the palate, the wine is medium to full-bodied, broad and fleshy, with a textural, voluminous profile, pinpoint bubbles and a chalky, phenolic finish. This is a ripe and powerful Dom Pérignon that finds its closest stylistic analogy in the 1990 vintage, and it is considerably less evolved than the more tertiary 2000 P2 today. While the P2 is a bit drier and more precise on the finish than the original release, given the wine's slow evolution the difference between the two is less pronounced than it has been for any vintage since 1996. - William Kelley, Wine Advocate