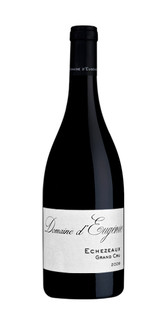 While this also reflects a touch of reduction it is sufficiently slight not to unduly mask the spicy aromatic profile of red currant, lavender and soft earth aromas trimmed in wood. There is outstanding intensity and depth of material to the tautly muscular and impressively concentrated flavors that possess plenty of underlying tension and controlled power on the long and mouth coating finish. This is a big Echézeaux, indeed the word robust comes to mind and it's a wine that should age effortlessly for years though it could probably be approached after only 5 or so. Note that my rating assumes that the reduction will eventually dissipate. Allen Meadows - Burghound
The 2016 Echézeaux Grand Cru was 95% impacted by frost, and Michel Mallard was not expecting to make a single barrel. Actually, he managed to get two barrels because the second generation buds started growing with alacrity. It was destemmed by hand, and one of the barrels is new. It has a very pure bouquet with dark cherries, cassis and violet scents, something almost “serene” about these aromatics, belying the “trauma” of the growing season. The palate is medium-bodied with very fine tannin, almost symmetrical in terms of focus, sorbet-fresh toward the finish with just a faint hint of blood orange and citrus lemon. This actually challenges the Grands Echézeaux, and it will be fascinating to see them age side by side. Neal Martin - The Wine Advocate
Note: from a .55 ha parcel in En Orveaux with vines planted in 1924 and 1979 that produced only two barrels in 2016
Yield just 8 hl/ha yield. Two pièces. Combe d’Orveau. 95% frozen. A small proportion of fruit was second crop.
Very dark crimson. Very attractive alluring nose. Really quite sumptuous. Fresh and fruity – not a note one usually writes about a grand cru – but with very marked ripe tannins underneath. Ambitious. Muscular under the pretty tight, focused fruit. This domaine definitely goes its own way. Fruit almost hides the tannins. Bone dry, rather minerally finish and then pretty persistent. Just slightly but not fatally bitter on the end. Jancis Robinson