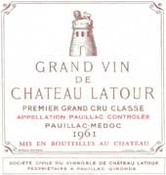 Port-like, with an unctuous texture, and a dark garnet color with considerable amber at the edge, the 1961 Latour possesses a viscosity and thickness. One of the three bottles served at the Chateau's tasting revealed a surprisingly aggressive, minty, herbaceous nose, but the other two bottles were liquid perfection, exhibiting fragrant, cedary, truffle, leather, mineral, and sweet, jammy aromatics, full-bodied, voluptuous textures, exquisite purity and concentration, and a layered, highly-nuanced finish that represents the essence of compellingly great wine.

The 1961 has been fully mature for over 15 years, but it seems to get richer, holding onto its succulence and fat, and developing more aromatic nuances without losing any sweetness or concentration. An extraordinary wine, it is unquestionably one of the Bordeaux legends of the century! Anticipated maturity: now-2025. - Robert Parker

The 1961 Latour is a legendary wine, one that flirts with perfection and this was consistent with the bottle poured at the Latour vertical three weeks earlier. After so many years it remains deep in color with light bricking on the rim. The bouquet is utterly ethereal, so pure and refined with vestiges of black fruit, pencil lead and mint, though the latter is not as pronounced as on the 1945. The palate is intense although not as aloof as I found the 1961 a few years ago. Perhaps it is mellowing with age, yet the symmetry of this Pauillac is astonishing, the edginess and aristocratic personality almost overwhelming. It is a deeply impressive wine, not caring a jot about doling out sensory pleasure. However that is quintessential Latour. Tasted at the International Business & Wine First Growth Dinner at the Four Seasons. - Neal Martin, Vinous Media