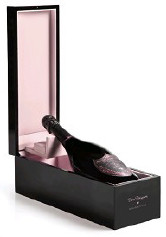 97 Points James Suckling: The nose on this Champagne is nothing short of extraordinary. Shows hazelnuts, chocolate and orange peel. Then goes to caramel. Full body, with a beautiful texture of fine bubbles and a light toffee and dried fruit character. It shows such length and class.

96 Points Antonio Galloni: The 1993 Dom Pérignon Rosé Oenothèque is incredibly tight for a wine of its age. I can’t believe I am about to suggest further cellaring for a 20 year-old Champagne, but it seems like the 1993 isn’t ready to show all of its cards just yet. With time in the glass, the aromatics begin to emerge, suggesting a wine of notable complexity, but ultimately the 1993 is a Champagne built on an impressive core of structure. Hints of orange peel, tea leaves and dried flowers linger on the beguiling finish. Ideally, the 1993 is best left alone for another year or two to allow the wine to recover from its disgorgement two years ago. If opened today, the 1993 needs quite a bit of air. Incidentally, I have also had the 1982 from magnum three times over the last year, and that wine is pure magic.