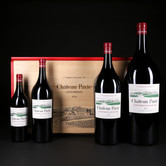 2016 is the first edition of this new collection which will be released annually 5 years after each vintage. Limited to 100 numbered cases, the collection includes 4 formats of 2016 Pavie: 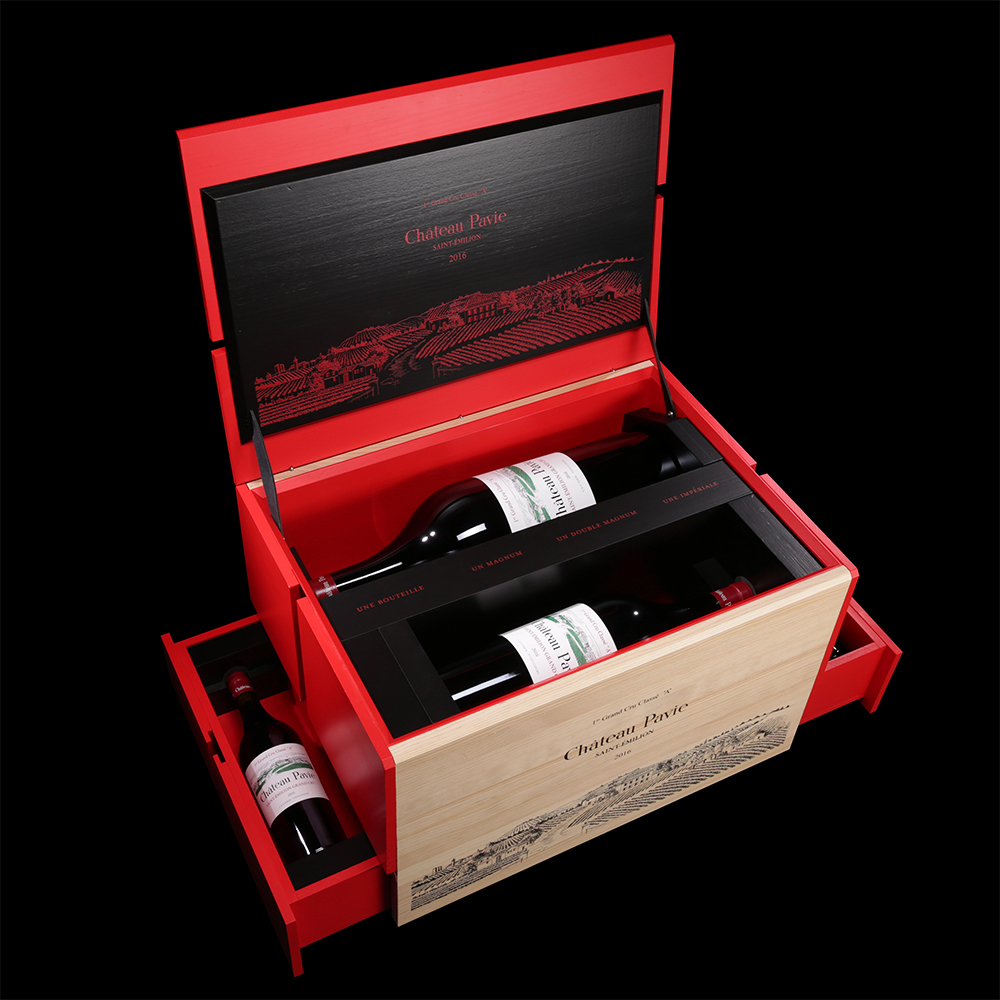 “The Alienor Collection”, name of this special offering, has been chosen to put forward the unique shape of the Pavie bottles. Since the vintage 2000, Château Pavie has been offered in a special bottle, named Aliénor ”. With its characteristic “ Saint Émilion ” shoulder, trunk like base and very deep punt with a small “push out inside the punt” designed to help the sommelier serve from it, the range boasts all the distinctive marks of vintage bottles and is optimum for a perfect ageing. In 2012, to celebrate the move to becoming Saint Emilion 1er Grand Cru Classé ‘A ’, the magnum becomes available with this Aliénor ” shape. Since the vintage 2016, Château Pavie is now able to offer this special bottle shape up to the imperial size, equivalent to 6L. Today these are the four formats, bottle (75cl), magnum (1,5L), double magnum (3L) and imperial (6L) proposed in this very special limited editio n wooden case. The name, is also referring to the famous medieval queen Eleanor of Aquitaine (queen of France and then England), who married king Louis VII in the Bordeaux Cathedral Saint André and mother of Richard Coeur de Lion." - Chateau Pavie

The 2016 Pavie a blend of 60% Merlot and 40% Cabernet Franc. Very deep purple-black in color, it needs a little coaxing to begin, slowly unfurling to reveal a fragrant perfume of violets, chocolate-covered cherries, crushed blueberries and eucalyptus over a core of preserved plums, kirsch, black raspberries and crème de cassis plus hints of licorice and chargrilled meat. Full-bodied and built like a brick house, it has a solid foundation of firm, super ripe, grainy tannins and seamless freshness interknit with the black fruit preserves and minerally layers, finishing very long and very decadent. Superb! - LPB, Wine Advocate

Spectacular aromas of crushed berries, such as blueberries and raspberries. Fresh flowers with hints of sandalwood. Exotic. Saturated palate of so much fruit, yet remains agile and energetic. Great length and texture. Fills your mouth. This needs time, but a classic. Twin brother of the perfect 2015. - James Suckling

Turning the dial up considerably, the 2016 Château Pavie leaps out of the glass with a thrilling bouquet of crème de cassis, toasty oak, graphite, white truffle, crayons, and flowers. A blend of 60% Merlot, 22% Cabernet Franc, and 18% Cabernet Sauvignon brought up in 85% new French oak (the new oak has been dialed back in recent vintages), this full-bodied Pavie is made in a more elegant, seamless style compared to prior great vintages, yet it still has brilliant depth of fruit and concentration, ripe, present tannins, a seamless texture, and an awesome finish. - Jeb Dunnuck

The 2016 Pavie is simply magnificent. Gracious, perfumed and exquisitely beautiful, the 2016 has it all. I can't remember seeing a Pavie with this much translucent energy and nuance. Black cherry, plum, lavender, spice and menthol all infuse this explosive, young wine with tremendous character. In the glass, the 2016 is vivid, aromatically deep and full of saline-infused energy. It is without question one of the wines of the vintage. As it turns out Gerard Perse also opened the 2008. Although the two vintages (2016 and 2008) in question are quite different in style and quality, the trajectory Pavie has taken in recent years is evident. The 2016 is a thrilling wine. That's all there is to it. The blend is 60% Merlot, 22% Cabernet Franc and 18% Cabernet Sauvignon. Tasted two times. - Antonio Galloni, Vinous Media

This is a rather showy—and captivating—display of fruit, with waves of lush cassis, raspberry and plum reduction flavors flowing through with authority and grace while a swath of chalky minerality stays deeply buried throughout. Toasty, glistening with vanilla and apple wood notes, but the fruit has the oak bridle easily in hand. One of the Right Bank showstoppers of the vintage. Best from 2024 through 2040. From France. - James Molesworth, Wine Spectator

One of the most thrilling surprises of the vintage, here a new approach to a more finely-wrought Pavie has collided with a vintage that has natural freshness and acidity. The result shows the potential of this terroir. Without a doubt the best Pavie that I have ever tasted, and one where I have not had to say, 'yes, but...'. Let's not pretend that it's night and day from the old regime, but nor should it be - Pavie needs to keep its signature black fruited glamour and intensity, as that is part of what delivered its new status, but to my mind this is a far better balance than in the past. The blend is 60% Merlot, 22% Cabernet Franc and 18% Cabernet Sauvignon, the lowest amount of Merlot since Perse arrived. This still has reams of intense fruit, but the tannins are not immovable as they have been in some years, and pulses of minerality leap up on the finish to make your mouth water. Gorgeous. It is also fascinating to learn the technical details that have helped bring out the vintage character - besides the lower Merlot content, there were 10 days less maceration than last year and only 70% new oak. - Decanter