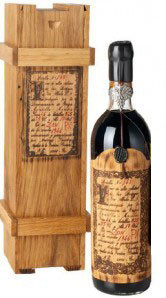 The 1946 Don PX Convento Seleccion produced with Pedro Ximenez grapes dehydrated under the sun at the time of the Second World War, was only bottled in September 2011. This is an extreme wine, my first descriptor was ultra-mega-super concentrated. It is unbelievably powerful, both in the nose and the palate, full of umami, with sweet cinnamon, Christmas cake, camphor, petrol, lemongrass, Belgian chocolate and butter. Incredibly complex and rich, sweet, balanced and smooth in the palate, it is both very sweet and somehow salty, and with time it develops a black olive note. It combines the texture of the 1962 and the elegance of the 1949. It is as decadent as it gets. 825 bottles were produced. This wine will survive all of us. These wines are kept for generations and offered in very small quantities, but its amazing that you can still buy and drink something so old, and Im even tempted to say that it might represent good value for what it is. A real tour de force sweet wine. Drink it if you ever have the privilege to do so from 2013-2060.

This is a peculiar winery, a little eccentric and unusual, a family affair created in 1922 although their roots can be traced back to the 19th century. The core of the winery is located inside an old electricity plant in Aguilar de la Frontera, south of Cordoba, in the heart of the Montilla-Moriles appellation and directed by collector, inventor and entrepreneur Antonio Sanchez. They sell 650,000 liters of wine per year, of which 40% is exported and sold in 27 different countries. They are growing in the US, the UK, Australia, and also with increasing interest in Asia, mainly for the sweet wines, Antonio Sorgato, the export manager of the firm, tells me. We are selling sweet wines, but Fino, its much more difficult. This is not something unique to them, as the whole Montilla-Moriles is better known for its sweet, dark, unctuous Pedro Ximenez wines. All the wines they produce are of course fermented from Pedro Ximenez white grapes, but for the sweet wines the grapes are sun-dried, dehydrated into raisins, and the resulting wine is brown in color which gets darker as the wine ages and concentrates in barrel. The oldest examples are an opaque black with an amber rim as dense as motor oil. They have a most impressive collection of single vintage PX wines going back to the time of the Second World War. Luis Gutierrez